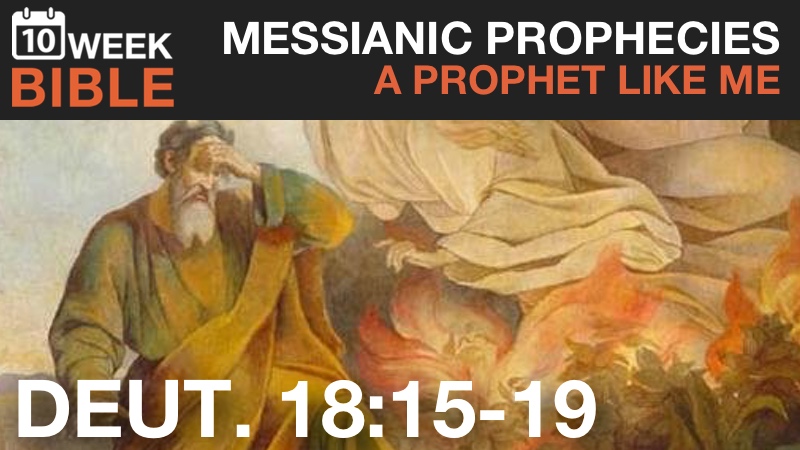 VIDEO | Messianic Prophecies – A Prophet Like Me from Deuteronomy 18 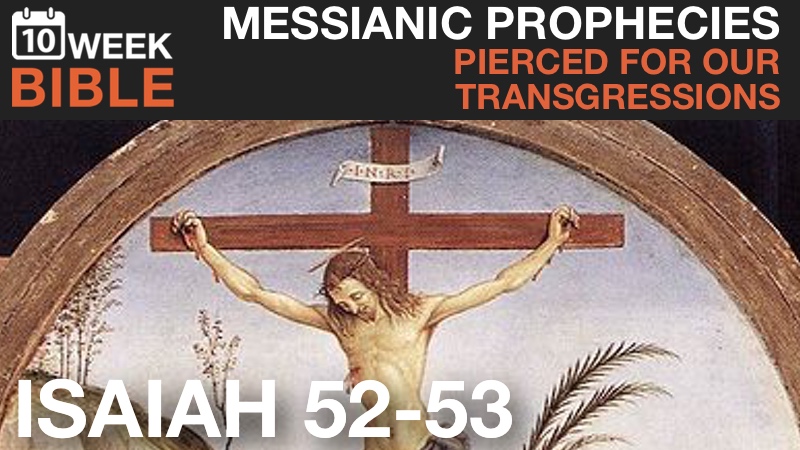 VIDEO | Messianic Prophecies – Pierced for Our Transgressions from Isaiah 52

Last time we ended with the blowing of the sixth trumpet, and now we will take another break from the action to be given more background information. This is the second parenthetical section of Revelation and it will set up the majesty that is the seventh trumpet.

This section of Revelation will show us that God fully intends to speak to His people prophetically during the tribulation period. God will not leave His people in the dark during the darkest days of history, but He will speak to us and give us direction when we need it the most.

51Behold, I tell you a mystery: We shall not all sleep, but we shall all be changed— 52in a moment, in the twinkling of an eye, at the last trumpet. For the trumpet will sound, and the dead will be raised incorruptible, and we shall be changed.

This is the moment that God will rapture His beloved bride—we will indeed be “caught up” (in Latin, “rapio”, or “rapture”) as Paul also calls it in 1 Thessalonians 4:17.

We will see that as soon as Jesus’ bride is raptured (taken away, “caught up”), God will now pour out His wrath on earth and make it His own. The Seventh Trumpet brings to a close the 1,260 days of the Great Tribulation, and now this “mystery of God” will be revealed.

In chapter 8, we are immediately whisked back into the midst of the seal judgments as the seventh and final seal is opened.

The final seal is what has held back the opening of the scroll that God the Father gave to Jesus, and as we see it opened, we will now hear trumpet blasts announce the judgments written within it.

If this all hasn’t been bad enough already, we are told that things are about to get much, much worse for the inhabitants of earth.

We will have another parenthetical section before the seventh trumpet, and we will see that this is a tremendous, holy moment for those watching from heaven. Whatever the last trumpet is, it is one of the greatest moments in human history. We will see that it is the culmination of the plans of God on earth—the greatness of His creation!

In Revelation five, we saw God give Jesus the scroll with seven seals holding it closed. Now we will watch as Jesus pulls apart the scroll one seal at a time.

As Jesus opens the first seal we hear the four living creatures shout “Come and see.” They say this as Jesus opens each seal. The implication here might be that John would be otherwise inclined to look away. What is going to take place is going to be confusing at first, but once the scroll has been opened, it will make sense.

In the first seal, Jesus is actually giving authority to a conquerer on a white horse to come forth in the earth. He is given a bow, but without an arrow or quiver. This is almost certainly a reference to the Antichrist, henceforth known as The Beast in Revelation. Many scholars disagree on this, and there are almost as many interpretations to who this rider is as there are books on the subject. The fact that this rider is on a white horse cause many to reject the idea of him being the Antichrist.

One of the the things that offends people about Jesus potentially releasing the Antichrist is when we understand what he will do intentionally to the saints. But one thing is clear and undeniable—it will be God who grants Him authority to conquer the earth and the saints specifically. We are told this plainly in Revelation 13:7.

It was granted to him to make war with the saints and to overcome them. And authority was given him over every tribe, tongue, and nation.

This brings up some very hard questions, but ones we must ask if we are to fully understand Revelation. Why would our loving God knowingly release a conquerer whose main objective is to oppress and kill God’s people? When we study this book, we will see why God is at no point less loving because of this, but we must not distance ourselves from the offense we feel at this. We must face it head-on, and God will answer us for it as we study His plan for the end of time.

This rider on a white horse seems to corroborate the image we are given of the Antichrist by Daniel—that he will be a deceiver who initially brings peace.

With this seal, a red horse and rider are sent out. They will bring world-wide war on the earth. These horsemen may be literal or symbolic of different aspects of the Antichrist’s reign as it progresses. The similarities are striking.

The third horse is now black, and he and his rider will bring scarcity on the earth. What he proclaims is that basically, a normal laborer’s day’s wages will by enough food to feed one person very meagerly. Some believe that the reference to not harming the oil and wine means that the wealthy of the earth will be untouched by this judgment, something that will deepen the growing hatred on earth as the Paul describes in 2 Thessalonians 2:7-8.

A pale horse and rider come next. This “pale” is a reference to the color of human skin when it is dead. We find out that a quarter of the earth is going to die in ways only our wildest imaginations can make sense of. There have been many times when disease and war have taken unthinkable percentages of the earth’s population, but nothing will have ever come close to this in terms of percentage and numbers. If this happened tomorrow, it would amount to over 1.75 billion people dying in what may only be a few months’ time.

The first four seals are revealed in a pattern and now that pattern is broken. Now we take a step back and see the throngs of martyred saints, most of which may have died during this early tribulation time at the hands of the Antichrist and his kingdom. We hear them cry out for justice and vengeance.

We must assume that they are not asking for this amiss, for they are now eternal spirits hidden in the very presence of God Himself, and they are given a good answer. They were given white robes to symbolize their righteous deeds and told to wait until their number was complete.

This does not seem like a judgment, but when we consider God’s jealousy for us, we can imagine it is far worse for the earth than the first four. When God’s saints cry out to Him, He answers and He answers powerfully. This should conjure up images of the Exodus and God’s answer to His peoples’ cries then. The cries of God’s martyrs are about to release tremendous calamity on those who have made war against God and His people.

The nature of how God’s judgments and plan unfold change dramatically with the sixth seal. Up to this point, every judgment has taken place by natural processes. Humans have killed through war, people have asked for judgment and disease has ravished the earth. From here on, however, things take a decidedly supernatural course.

There is going to be such a large earthquake that every mountain on earth will be moved. How that will look we do no know, but we can be sure by the reaction of the greatest people on earth that it will be absolutely shocking. Stars falling to the earth, blood moons and the sun turning dark (eclipses) are all normal occurrences, but something is different about these. Again, they make the kings of the earth hide in the mountains.

The most curious thing about the sixth seal is probably that John said the sky was opened like a scroll and the heavens were revealed. There is great speculation about what John meant by this, and our imaginations can only wander, but the result is certain. From this point on, there is no confusion about who is perpetrating all these judgments. The kings cry out to be hidden from God Himself, in much the same way the Israelites asked Moses to speak to God so they wouldn’t die (Exodus 20:19).

There are some that think Revelation seems unkind of God to release the coming horrible judgments upon a people who have no clue about what is going on, but here we see that no one on earth is left innocent at this point. The rebellion against the judgments we will see will not be in ignorance, but with full understanding that a divine being is carrying them out, and the people of the earth will openly rebel against Him.

Chapter seven abruptly changes course from the sixth seal. We take a pause from what the angel was showing John and we enter a parenthetical section

First we are told that 144,000 from each tribe of Israel will be sealed and protected. There are many misconceptions and cultic beliefs based on this, primarily because the twelve tribes no longer exist in discernible form. For centuries it has been believed that this must be figurative since Israel no longer exists in this fashion. Today, the best any Jew knows of their heritage is that they are possibly descended from Judah, Benjamin or Levi. They are the three tribes that survived intact in the new temple era. The word “Jew” is a form of the word “Judah.”

But John was not confused. The angel said Israel and that is what He meant. Today we have a national Israel, something unthinkable just a century ago, and we will certainly somehow see the emergence of these tribes. The list is interesting in itself because it excludes Dan and Ephraim and includes Joseph and Manasseh. Every other list includes either Ephraim and Manasseh or Joseph separately, since they were Joseph’s children reckoned to Jacob in Egypt.

What we do know for sure is that in the midst of the Antichrist’s brutal reign, God will sovereignly protect these 144,000. But it doesn’t stop there. God will next show us the greatest supernatural protection ever revealed.

Jesus told us that the end would not come until there was redemption from every tribe, tongue and nation (Matthew 24:14). What we see here is the completion of the task that Jesus gave us in Acts 1 to make disciples of every nation.

One thing that is easy to miss is that these in white robes have suffered. They have been exposed to the sun, they have hungered and thirsted, but God will wipe away every tear from their eyes. They have all specifically come out of the great tribulation, the first time that word is referenced in Revelation.